A Step Forward, Then Back, Then Forward Again

I've written here before of my ongoing focus on doing things once - not having to re-do projects due to mistakes or less-than-stellar work.   In a cumulative hobby like model railroading, progress of any sort adds up to great results, but having 'do-overs' sets us back.  Well, you win some, and you loose some.

Here's an image of ML-482 rolling downgrade in the morning through CP 277.  This past week I had to 're-do' the ditch light installation on the lead locomotive, Conrail SD50 6712.  One of the ditch lights had burned out.  Frustrating!  I opened the unit up and found that one of the wire leads had become entangled in the drive shaft, which had sheared it right off.  A simple fix, and a good reminder to tape wires out of the way of moving parts.

However, several hours later, the other light went out.  Now I'm getting really frustrated.  I decided to look at the manual, and thanks to Alex Lang's advice, learned that the resistors on LED lights will only support one LED.  I had wired both bright surface mount LEDs to the same resistor, and burned out the channel in the decoder.  No good!

Thankfully, JMRI's DecoderPro easily allows us to re-map functions to different buttons.  Since there were other light function channels that had not been affected by my mistake, I remapped the ditch lights to that function, and wired each LED to its own resistor.  A test showed we were good to go.

Here too are shots of ON14's power in Onondaga Yard: 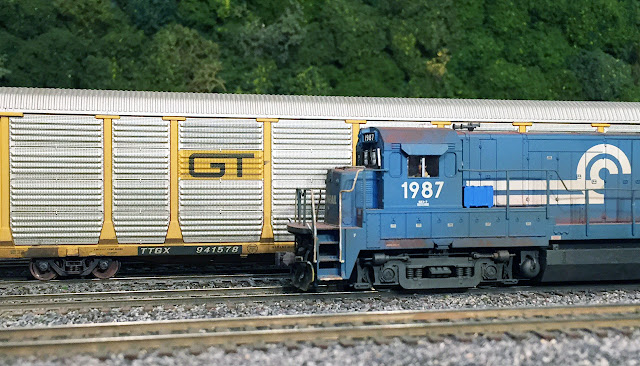 And, a shot of the maintainer's view of the CP282 westbound signals, from the cat walk:

Sometimes, even our best intentions can still lead to mistakes, and in those cases we need to take a breath, learn from the mistake, and move on.  Lessons learned can be worth the cost of a mistake, and in this case there is no doubt.  As more ditch lights come to the fleet, this lesson will save me plenty of mistakes to come!