We are coming close to the big step of purchasing and installing a photo backdrop on the Onondaga Cutoff.  Using the photo backdrop approach, as opposed to painting, is not a decision I have taken lightly, as some of the long-time readers here will remember.

Two years ago, I tried out painting some distant hills on top of the overall coat of grayish-blue, which worked fine when viewed at a distance but was quickly inadequate when viewed from any closer than about 5 feet.  I read about techniques.  I practiced.  And tried again.  I worked at painting in more detail, but the result was rather disappointing.  I'm no artist painter!

After that, I had the idea to install a photo backdrop of downtown Syracuse (Syracuse, On The Horizon) which was completed in November 2015.  I was very pleased with how that turned out, and it quickly convinced me to look more into photo backdrops.  There simply is no better way to achieve the depth of field and complexity than a properly scaled photograph!

I looked into using more of my own photographs, processed in Photoshop, to complete the rest of the railroad and realized that it would be (1) very expensive and (2) involve seams every few feet.  Not ideal.  Again, I turned to the internet and to my surprise, found several different options for more generic photo backdrops.  Some were not very good - the prints had a fisheye effect, taken from one vantage point as a panorama, and poorly processed.

The best one I have seen so far is called 'Backdrop Warehouse' and I ordered a sample of one of their scenes.  For $20 shipped, they sent me a 1' X 12' backdrop scene - much cheaper and with far less seams than my plan to use my own large prints.  I installed it behind CP277.  Here's how it looks:

I love the depth that is instantly added to the scene, especially with typical Northeastern details like the telephone pole to the left.  Central Onondaga County is lots of these distant hills on the horizon.  The sky is a nice humid blue, matching my plan for a late summer/early fall theme.  While the sample had very little sky, I like the clouds and color much more than my blue paint.  I do not, however, like how washed out the scene appears, and wish the resolution were a little sharper too.

It turns out those are issues that I believe can be solved by working with the contact at Backdrop Warehouse.  They offer similar scenes with higher resolution, and better contrast.  Their scenes are professionally processed to provide the same scale throughout - no strange fish-eye effect.   And, I can specify how much sky to include, allowing me to have just a few inches of distant woods or fields and then enough sky to suggest the wide-open hills of Onondaga County.

The website allows all sorts of demos too, so I can put together 4 or more 12-foot-long backdrops, so that the scene for the entire railroad can be purchased at once and be continuous.  Installation will be a big deal...imagine having hundreds of dollars of custom backdrop, but having to hang it like wall paper over a model scene, avoiding wrinkles, with no second copy to back us up!

That said, I think this is the way forward.  I will be reaching out to the company in the next few weeks and keep this blog posted on progress.

In other news, tracklaying is underway on the Cazenovia Industrial Track.  It was fun to lay some track again, for the first time in quite a while!  Here it is curing under weight: 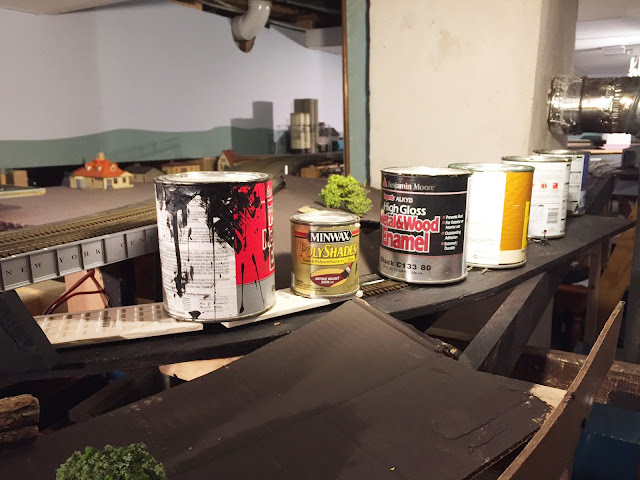 The cool basement provides a great respite from the humid, 90+ degree evenings we have been having in NJ this summer.  Little by little we're getting there!