Ever since I can remember, 'Model Railroader' magazine by Kalmbach Publishing Company has been a staple of the model railroad hobby.  I've been a subscriber for decades, and it has long been a source of inspiration and of wonder for me - as a child, seeing these amazing layouts was defining over time. The idea of being published in 'Model Railroader' was a long-time dream for me.

I had practiced for the last few years taking some photos of the railroad, and sharing them with you here and with friends as well.  It's an entire subset of the hobby! 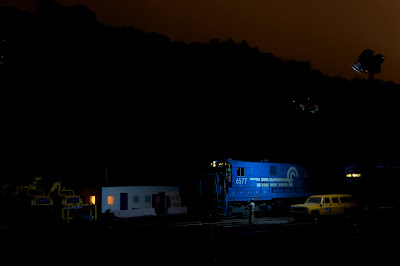 Due to a variety of timing and circumstance, I was introduced to the columnist for the new "On Operations" column in the magazine, Jerry Dziedzic.  He actually attended several operating sessions and very much enjoyed them, especially the overnight part of the operation. We enjoyed having him as an operator, as well!   Much to my excitement, late last year Jerry approached me with a request to feature the night operations on the Onondaga Cutoff in one of his columns, including a photo to help set the tone for the column.

I am thrilled to announce to you all that in the May 2016 issue of 'Model Railroader', you will find Jerry's column discussing night operations on the Onondaga Cutoff, accompanied by a photograph I took!   It's a fun read and a good issue overall.

Here's a few out-take photos from the shoot that eventually provided the photo editor the material he was looking for.  This is train SEBU, shown before dawn at Onondaga Yard, before making his pickup and set out. 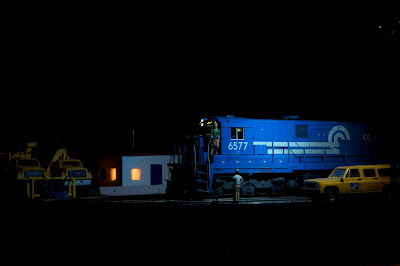 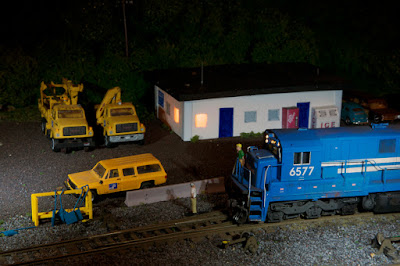 The final shot was close to what Jerry and the editors decided they wanted.  This ended up being a process of about 4 different shoots to get to the final product, and it was a great experience to be able to go through the process of proofs, critiques, and edits with professionals.  I hope there are more to come!

Enjoy, and as always thanks for your support!