The Consequences of Plausibility

One of the fun challenges about building model railroad is trying to fit a model of reality in a space that has different boundaries than those that govern the prototype.  This applies to any prototype-based model railroad, whether of a specific prototype or not - there are few modelers with the available space to produce a scale model of a yard or even an interlocking.   The key for us who are creating the model railroad is plausibility:  making as many scenes as we can as believable as possible.

And so, as scenery continues to develop on the Onondaga Cutoff, I have started to look for ways to do just that.  It turns out that the actual geography of the fictional Cutoff needed to be re-imagined! This railroad is operated as a southern bypass around Syracuse, NY, and as I started to really study some local topographical maps to see where the railroad would have run, it was obvious some of the scenes would have to change to correspond with where the mileposts would fall. 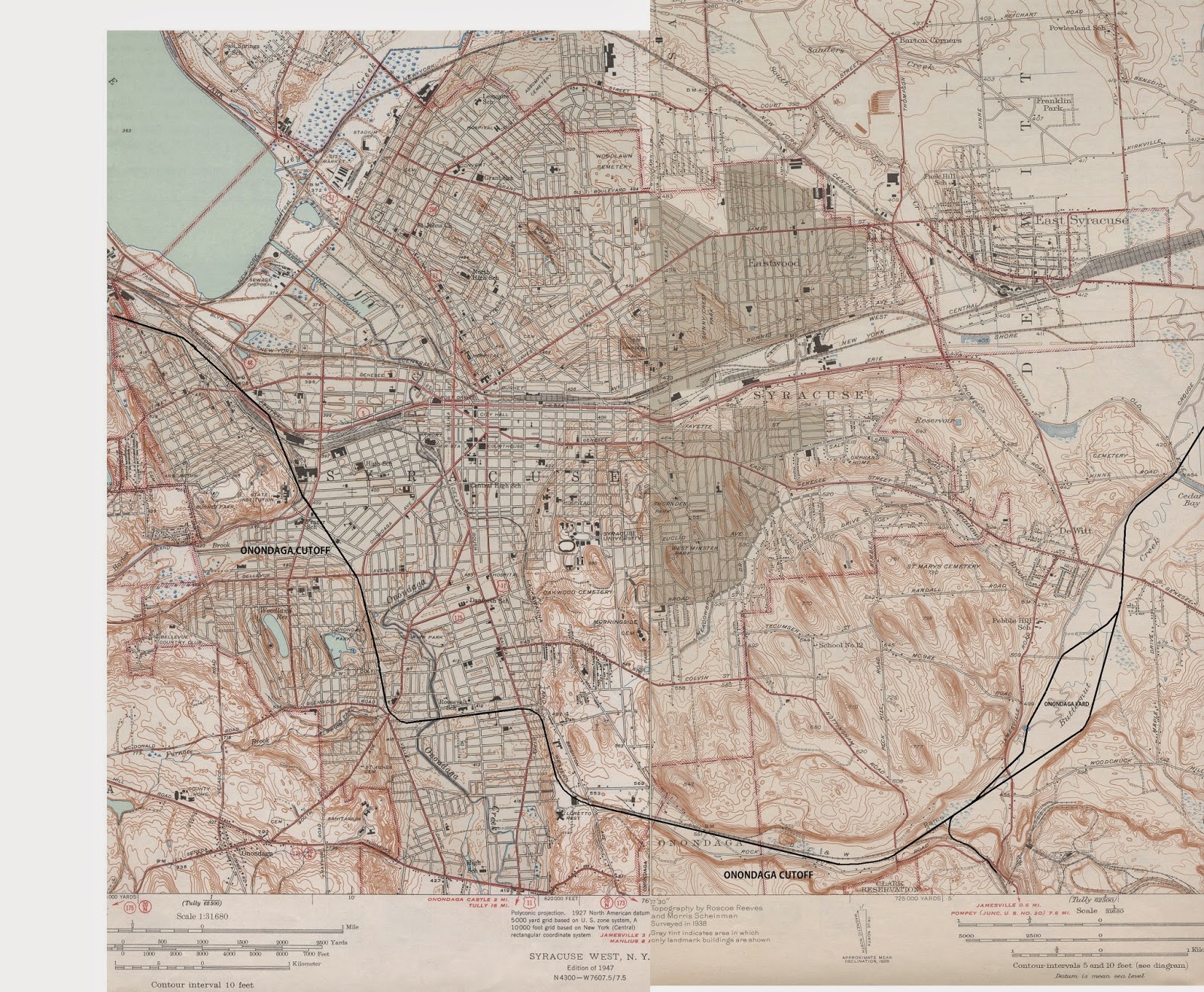 Here is a scan of several quadrants of topographical map for the City of Syracuse, circa 1947.  Click on it for a full size view.  I have used photo software to overlay a bold black line showing the approximate alignment of the Onondaga Cutoff, aligned to follow the topography of the area to minimize earthwork needed for construction.

Following the development of the prototype routes in the area in the 1930's, the OC would have been modernized with grade separation through the South Side of Syracuse.  To the right, you can see where Onondaga Yard would be located, as well as the junction with the M&E, which would a new connector to join the right of way of the former Lackawanna's Syracuse Branch and run south towards the fictional Doelger Brewing Company brewery and Euclid Yard.  Just off this map to the right is Fayetteville, and therefore what we had previously been calling Camillus, NY will be relabeled Fayetteville to add to the plausibility of the whole concept.   The Cutoff then continues across that plain out towards its junction with the Chicago Line east of Kirkville, NY.

These sorts of mental exercises help me to build a convincing story for the model railroad, which in turn helps to focus attention on aspects that add to the operating experience.  Sometimes, as we learn more about our prototype, we need to make changes.  That's the chance you take when you're trying to create a plausible prototype!