We're back up and running after replacement and rewiring of the circuit breakers for the railroad! 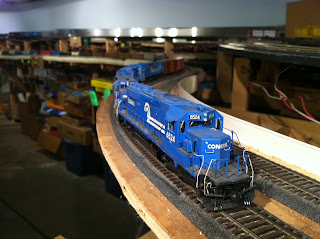 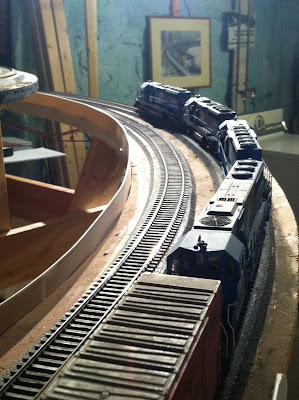 The first move to test our new breakers was a 52-car ELSE.  Here that train is in photos, coming and going at milepost 293, climbing towards the summit at CP 282.  Thanks to sound construction techniques, labeled terminals, and the patience to have done it right the first time, I was able to quickly replace the 6 breakers with the issues by simply substituting the new ones, which all work as intended.  This time I remembered to ensure that the 'SETUP' jumpers were not left on the boards!

One thing I did change as part of this process was the bus wire that ran to the breakers from the command station.  All of this was originally solid 12-gauge wire, which is very stiff and therefore puts some strain on the fine soldered joints on the printed-circuit boards of the EB-1 breakers.  I changed all of it to 14-gauge stranded wire, which is much more flexible.  The track bus all remains the original solid 12-gage copper wire.

So, we're back in business on the Onondaga Cutoff!  Later this week, we hope to begin running wire from the BD-20 detectors (see the January 2013 blog entries) back to the command station, which will enable the computer to 'see' the entire railroad from a block detection standpoint.  Exciting developments coming soon!