Work on the new wye, the Island Track, is coming along.  All that remains is to wire in a new PSX-AR unit into the power bus, which will allow the tail tracks of the new wye to automatically reverse polarity depending on which leg of the wye is aligned for the mainline.  The PSX-AR is a DCC breaker/auto reverse unit that, according to the documents and reviews, will allow this to appear seamless to the operators.

The new look of the eastern part of CP294, on the bottom level: 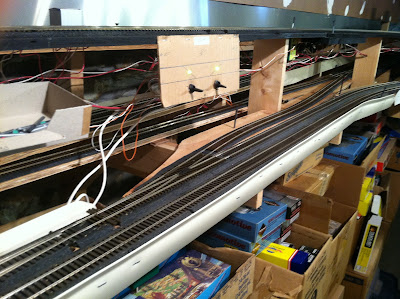 The new turnout is in the center of the frame, with the new 294 lead working east, and with the corresponding 274﻿ lead working west behind the risers.  They come together at the Island Switch.

More to come soon, as the operation integrates this new infrastructure!